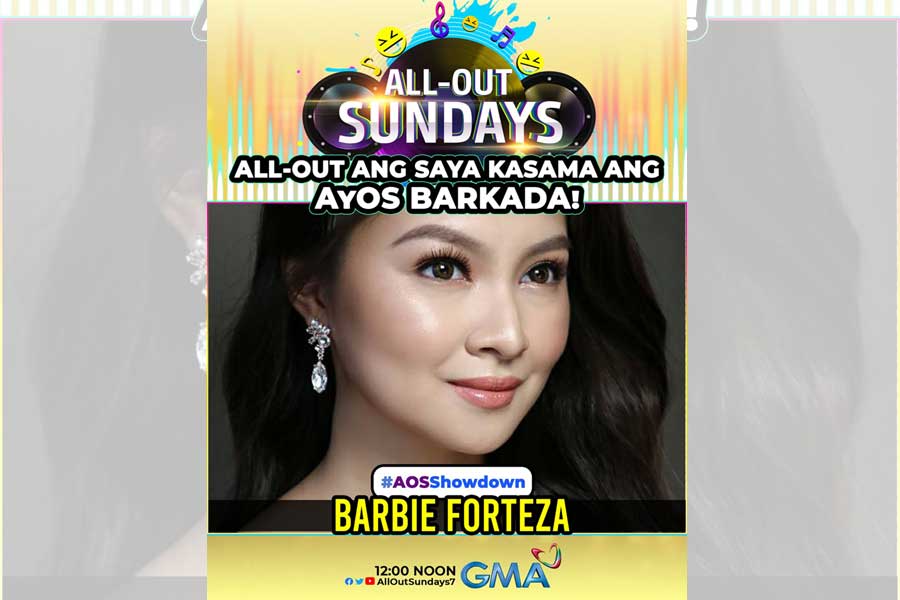 Barbie oozes with confidence in love and career

BARBIE Forteza joined “All Out Sundays” just last Valentine’s Day and she was made a part of the Cypher dance crew with Kapuso stars like Kyline Alcantara, Miguel Tanfelix, Rayver Cruz and others.

Doing “All Out Sundays” is so much fun for her. “Kasi every weekend, you have a get together with dear friends. At sa show, walang limit kung ano ang ipapagawa nila sa’yo kaya macha-challenge ka talaga. But it’s a good kind of challenge. Kasi sa acting, you have to be subtle, pero dito, dapat all out ka talaga. Nahahasa nga ako pati sa pagho-hosting at napakadaldal ko na raw kaya nga naba-bash ako.”

She started as a child star and now, she will be 24 years old on July 31. Is she ready for more mature roles? “Naku, huwag muna. Masaya pa naman ako as of now doing wholesome roles. Pero darating din tayo diyan, unti-unti, walang gulatan.”

She’s billed as GMA’s Primetime Princess and her last two shows “Anak ni Waray” and “The Lookout” in “I Can See You” are both topraters. But now, since “First Yaya” and “Agimat ng Agila” are rating high, it’s touted that it’s lead actress, her future sister in law Sanya Lopez, is now the real Primetime Princess. How does she feel about it?

“Ay okay lang po. No problem for me. Grabe, I’m really so happy and proud sa huge success ng shows niya. I know her well as a person, so I can really say that she has grown so much. Ang galing nga kasi nag-improve talaga siya not only as an actress but also as a person.”

She and Jak Roberto have one of the most high profile relationships in showbiz as they chronicle their moves together in their vlog. Is he really The One for her? “Naku, subukan niya lang na hindi. Oo naman. Wala na kami sa phase na getting to know each other or testing the waters. Nandun na kami sa phase na kung may problema, ayusin natin ito. Breaking up is not an option.”

How does she feel that Jak is now going on lock in taping for his new show? “Ang sagot diyan is video call, the answer to everything, and 100 percent trust to each other. But I’m really so happy for him na may regular show na siya uli, kasi sobrang na-miss na niyang umarte. Excited na nga siya magtaping, e.”

Barbie reminds everyone to watch the coming special presentations of “All Out Sunday”. “On June 13, we will be celebrating the 71st anniversary of GMA Network so don’t miss it kasi live siya, star-studded and siksik sa big production numbers. Sa June 20, continuation ng GMA anniversary celebration plus a special tribute to the health workers na inalay ang buhay nila serving us sa pandemic and to all the Covid survivors. Don’t miss them kasi masaya talaga ito.”

A grand comeback for Ethel

ETHEL Booba is the original Sing-Galing BidaOke Champion and she now makes a grand comeback after 19 years as a special guest this season on the iconic videoke show for more laughs, plus a stunning revelation. Ethel has proven herself not only as a good singer but also as a truly hilarious comedian so she surely makes the show much more lively and entertaining.

It was in 2002 that Ethel Booba boosted her showbiz career when she successfully defended her title as BidaOke Star for four weeks in “Sing Galing”. Known for her flamboyant outfits as well as her powerful singing voice, the popular comedienne is simply one of the most entertaining Sing-Galing singtestants to ever grace the show’s stage. She sang her own rendition of classic songs such as “Memories” by Barbra Streisand, “My Valentine” by Martina McBride & Jim Brickman, and “All Behind Us Now” by Patti Austin, for which she was able to win and reign as a champion.

“I’m so happy to be back here dahil it gave my career such a big push then,” she says. “For my special comeback this season, I’ve prepared a big surprise for all Sing-Galing viewers. Wag nyo na itanong kung ano, kasi surprise nga no? Abangan nyo na lang and basta I promise you masisiyahan kayo.”

Having her back on the program will surely double the show’s entertainment factor led by hosts and Sing Masters Randy Santiago, Donita Nose, and K Brosas, and the judges called Juke Bosses Rey Valera, Ronnie Liang, and Jessa Zaragoza.

Originally aired in the late 1990s, “Sing-Galing” is a multi-awarded Videoke Game program that was the first of its kind in the Philippines and Asia, allowing everyone an equal chance to win and earn by singing. Today, its inclusive karaoke format continues to draw in the gutsiest and bravest participants to have fun on the show.

Don’t fail to see Ethel Booba for an entertaining and enjoyable bonding experience for everyone and anyone who enjoys singing, “Sing Galing, Ang Original Videoke Kantawanan ng Bansa!” every night at 6:30PM on TV5. Produced by Cignal TV and TV5, it encourages anybody who enjoys singing—young or old, professional or amateur—to join in, heralding its slogan “Magkaka-sing galing tayong lahat!” Each episode has three singtestants competing in three rounds to crown the BidaOke Star of the Night, who will vie for a spot in the grand finale.