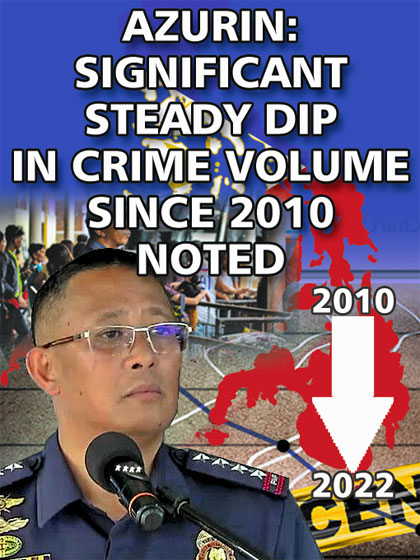 THERE is a significant, steady decline in crime volume in the country since 2010 amid a much-improved anti-criminality program by the Philippine National Police which has also greatly improved its ‘move, shoot, communicate and investigate’ equipment to prevent and solve criminality 24/7, PNP chief, General Rodolfo S. Azurin Jr. said.

As gathered by the Crime Research Analysis Center of the PNP Directorate for Investigation and Detective Management, a total of 52,874 index and non-index crimes were recorded from July 1 to August 2010 or during the early days of the presidency of the late President Aquino.

The record further went down during the 1st two months of the Duterte administration from July 1 to 20, 2016 of former President Duterte where a total of 49,781 Peace and Order Indicator or POI were recorded.

From July 1 to August 20 this year or during the first 50-days of the young Marcos administration, the recorded POI was pegged at 27,259.

On the other hand, the Crime Solution Efficiency or CSE of the Aquino government during the same period was placed at 21.10 percent; compared to the 69.68 percent CSE of the Duterte administration; and the 85.24 percent CSE registered during the 1st 40-days of the Marcos government.

During the 1st 50-days of the Marcos administration, the following significant reduction in the crime volume was recorded: a total of 4,977 Index Crimes broken down into 577 murder cases; 153 homicide; 526 cases of physical injury; 799 rape cases;719 robbery cases; 1,723 theft incidents; and 500 carnapping cases as well as 22,262 Non-Index Crimes.

The PNP said that it is apparent that the POI has been decreasing since the Aquino administration. A decrease of 5.85 percent in POI has been noted during the same 2-month period of the Duterte presidency compared to that of Aquino’s.

However, there is also a recorded 45.24 percent PO1 reduction during the 1st 50-days of the Marcos presidency compared to that of Duterte’s.

The PNP leadership released the statistics as Gen. Azurin dismissed reports of a growing crime wave in the country.

“PNP crime data shows a steady decline in crime trends over a 12-year period since 2010,” the top cop said.

Gen. Azurin said that an analysis of the crime trend since 2010 shows that it is apparent that the POI or the sum of both Index and Non-Index Crimes in the country has been decreasing since the Aquino administration started in 2016.

Gen. Azurin said they are trying to better address these incidents by greatly improving their visibility in the streets and going all-out in the campaign against drugs, wanted persons and loose firearms and other deadly weapons that could be used to commit violence in the streets.

“Lately we have noted what seemed like a sensational surge in social media reporting of some crime incidents, many of which were previously reported cases that had been categorized as solved by PNP units. Other purported crime incidents posted in social media turned out to be either rehashed or completely false information,” Gen. Azurin said.

“The PNP would like do our part in educating our people to be more discerning of the true situation, particularly on crime matters, and be able to distinguish between crime hike and crime hype,” he added.