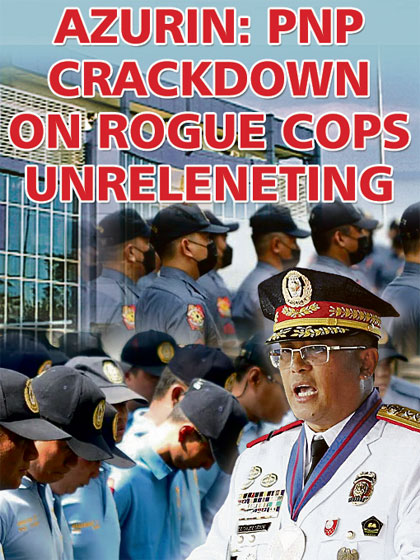 PHILIPPINE National Police (PNP) chief, General Rodolfo S. Azurin Jr. yesterday assured the public of their unrelenting efforts to identify and arrest rogues in uniform amid their massive internal cleansing program aimed at ensuring that good cops will be aptly rewarded while the bad ones will be punished to the hilt.

The top cop said that from July 1 to December 7 this year, a total of 1,211 PNP personnel were meted with various sanctions ranging from withholding of privileges to dismissal from the service.

Gen. Azurin said that of the total number of erring cops investigated by the PNP, 279 were dismissed from the service for various criminal and administrative offenses while 79 were demoted.

Another 472 were suspended while 381 more were meted with penalties of forfeiture of salary, reprimand, restriction and withholding of privileges.

Apart from being stripped of their service firearms and badges, rogue members of the police force have to contend with the fact that their eventual dismissal from the force will mean that all their benefits will be forfeited too in favor of the government, Gen. Azurin said.

The PNP chief cited the number of erring policemen who were fired from the force for robbery-extortion, some of them found to have extorted just a few thousands of pesos from poor victims who bravely filed a complaint and testified against them.

Once dismissed from the police force, an individual cop will lose all his retirement benefits including pension. PNP records show that following a period of active service of 20 years or more, the monthly retirement pay is 50 percent of the base pay and longevity pay, increasing by 2.5 percent for each year of active service beyond 20 up to a maximum of 90 percent for 36 years of service.

The PNP chief renewed his assurance to the public as two rookie Makati City policemen were arrested for robbery-extortion by agents of the PNP Integrity Monitoring and Enforcement Group headed by Brigadier Gen. Warrren F. de Leon in an entrapment operation on Friday last week.

The PNP chief commended the PNP-IMEG for hauling to jail Patrolman Mark Dann P. Advincula, 32, and Pat. Mark Joseph A. Segador, 31, both assigned at beat patrollers of the Makati City Police Sub-Station 6.

Brig. Gen. de Leon said that the two were arrested by IMEG agents in an entrapment operation conducted around 4:30 a.m. Friday along Apolinario Mabini Street in Poblacion, Makati City.

The PNP-IMEG launched the sting following a complaint from a call center agent whose two mobile phones were earlier confiscated by the arrested police officers. The two were accused of demanding money from the complainant for her release without any charges.

According to the complainant, she was threatened with a criminal complaint by the two policemen reportedly based on a separate complaint from a foreign national who claimed that he lost his ATM card and money.

Brig. Gen. de Leon said that the complainant, a female call center agent and her live-in partner are both Quezon City residents.

The woman claimed that Pat. Advincula used his own cell phone -the phone number found to have been declared by the accused in his PNP Personal Data Sheet—in calling her to demand money from her.

It turned out that the woman met a Polish-like foreigner in the evening of December 8 and befriended her. After they exchanged numbers, the woman said that the next day, she received a text message asking her to go to the Makati City Police Station to answer a complaint that foreigner lost P130,000 in cash and her ATM card after meeting the former.

The complainant said that when she decided to meet the text sender somewhere in Makati City, she was accosted by the two suspects who were on board a white vehicle with ‘Pulis’ marking but without a blinker and was taken to the Makati City Police Sub-Station 6.

The woman said that the suspects took her iPhone Promax 13 before going to their house in Q.C. where they again confiscated her live-in partner’s iPhone.

The two were then brought to Bgy. Poblacion for alleged ‘blotter purposes’ but were later asked to pay P50,000 in exchange for their two iPhones. The two policemen also did not file any criminal case against the two.

Undercover officers of the PNP-IMEG monitored the payoff and effected the arrest after the two conspired to receive the marked money from the complainant.

Members of the IMEG Counter-Intelligence Division, with the assistance of officers from the PNP Special Action Force’s 3rd Special Action Battalion, the Southern Police District Intelligence Division and the Makati City Police Station under Brig. Gen. Kirby John B. Kraft effected the arrest of the two after they conspired to receive the P50,000 boodle money topped by a marked P1,000 bill.

They were immediately stripped of their service firearms and PNP Identification Cards. The two also yielded the marked money. Their motorcycle keys were also confiscated by the PNP-IMEG.

Both suspects were immediately whisked to the PNP-IMEG headquarters in Camp Crame where they were locked up at the IMEG detention facility They will be facing criminal charges for robbery-extortion and administrative charges for grave misconduct, an offense punishable by dismissal from the service.

“The PNP will never tolerate any irregularity and breach of discipline in the police service. These two Patrolmen will have to face the consequences of their actions. We will always be steadfast in our thrust to discipline our personnel while we value each and everyone’s welfare while serving the Filipino people,” Gen. Azurin said.