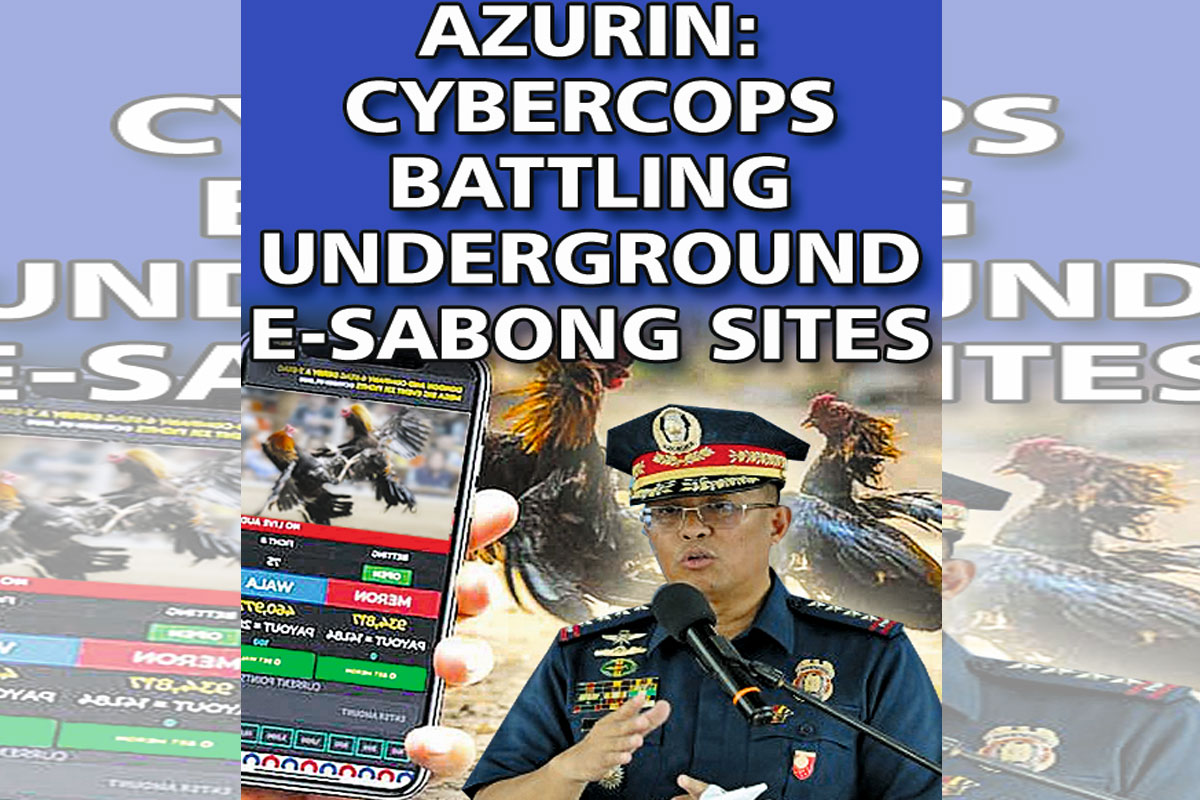 PRESENCE of ‘undergound e-Sabong’ sites in the country are continuously being monitored round-the-clock by the Philippine National Police Anti-Cybercrime Group (PNP-ACG) with our Cybercops ready to take them down as soon as they are discovered with the help of social networking sites, PNP chief, General Rodolfo S. Azurin Jr. told the Journal Group.

The daily monitoring of the illegal ‘e-Sabong sites’ being undertaken by the PNP-ACG headed by Brigadier Gen. Joel B. Doria was ordered by the top cop amid complaints about the continuing existence of the banned games in some social media sites in the country.

From December 5 to 10 alone, the Police Regional Office 7 (PRO7 headed by Brig. Gen. Roderick Augustus B. Alba had already conducted 109 operations against ‘e-Sabong’ in the Central Visayas region leading in the arrest of 283 persons and the confiscation of P155,779 in cash bets as well as eight computer sets and 52 cellphones being used to play the game.

PNP-ACG Operations Management Division chief, Colonel Domingo D. Soriano said that from May 3 to last December 5, they monitored a total of 98 websites and 102 FB pages, groups and accounts that are purportedly involved in ‘e-Sabong.’

The officials said that last week, they recorded two more Facebook accounts dedicated to ‘e-Sabong’ while five were deleted.

Domingo said their own operations versus ‘e-Sabong’ this year has resulted in the arrest of seven suspects as a result of two operations.

In Central Visayas, Brig. Gen. Alba said their all-out campaign to stop guerrilla ‘e-Sabong’ operations in the region from December 5 to 10 had already resulted in the arrest of 283 persons and the seizure of P155,779 in cash bets as well as eight computer sets and 52 cellphones being used to play the game.

He added that the arrested persons include ‘operators, tellers, referees and bettors’ who are facing charges for violation of Presidential Decree 1602 or the anti-illegal gambling law in relation of Section 6 of Republic Act 10175 or the Cybercrime Prevention Act of 2012 have been filed against the suspects.

The PRO7 director said they have launched a massive crackdown on illegal ‘e-Sabong’ joints in the region following an order from Department of Interior and Local Government Secretary Benjamin ‘Benhur’ C. Abalos Jr. and Gen. Azurin.

“We are going all-out against personalities involved in underground e-Sabong operations in Central Visayas despite the suspension of all e-Sabong games ordered by PAGCOR last May 4,” he said.

Gen. Azurin has also ordered a strict ‘One-Strike and No-Take Policy’ when it comes to all forms of illegal gambling activities in the country since he took over as the top cop last August 4.

For a start, he ordered the PRO7 Regional Intelligence Division to fully monitor and inspect Central Visayas cockpits to see to it if all of them have permits to operate.

The targets of the drive are former ‘e-Sabong’ outlets/stations. Brig. Gen. Alba also sought the full assistance of the PNP Criminal Investigation and Detection Group headed by Brig. Gen. Ronald O. Lee and the PNP-ACG in unmasking and sending to jail all personalities behind the illegal game.

A PRO7 Special Task Force was also created by Alba to oversee their crackdown versus the illegal game and ensure that all clandestine ‘e-Sabong’ websites in the region will be taken down by the Regional Anti-Cybercrime Unit.

Brig. Gen. Alba said he has ordered that the ‘non-existence of e-Sabong activities in the region’ must be supported by videos/pictures with cockpit arenas checked regularly.

He also said that he has also ordered all PRO7 units to work fully with the CIDG and the ACG in identifying secret ‘e-Sabong’ sites in the region with the help of faith-based organizations, the public and local government units.

He added that all ‘e-Sabong’ stations in Cebu City are also closed and already non-operational.

The same has been recorded in Lapu-Lapu City and the provinces of Bohol, Negros Oriental and Siquijor. He said that in Negros Oriental, the local police reported that there is no ordinance/resolution that authorizes operation of an ‘off-site’ cockpit betting in the province.

Brig. Gen. Alba said he has ordered ‘intelligence-driven’ operations to determine if cockpit arenas in the region are being utilized for the illegal activity. As ordered by the PRO7 director, all concerned police units have been instructed to regularly inspect these establishments to prevent ‘e-Sabong’ activities.

Gen. Azurin ordered a crackdown on all ‘guerrilla E-Sabong operations’ which are believed to have sprouted in some parts of the country particularly in Visayas region amid the termination of all online cockfighting operations in The Philippines last May amid its social cost to Filipinos.

The top cop ordered all 17 Police Regional and Provincial Offices, the PNP Directorate for Intelligence headed by Major Gen. Benjamin C. Acorda Jr., the PNP-CIDG and the PNP Intelligence Group headed by Brig. Gen. Andrew D. Cayad to identify the operators of these clandestine ‘online sabong’ operations and see to it that they are arrested and charged in court.

Gen. Azurin said he has ordered the crackdown on ‘guerrilla E-Sabong operations’ amid complaints that the lives of countless Filipinos have gone astray after they got addicted to the online cockfighting games.