Azurin: All crimes being investigated by police 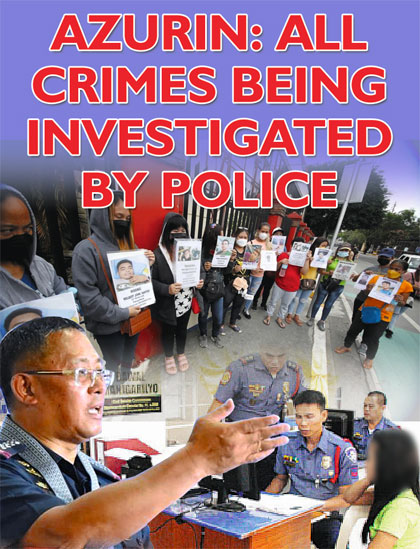 PHILIPPINE National Police (PNP) chief, General Rodolfo S. Azurin Jr. has assured the public they are fully investigating all reported crimes in the country with the end in view of sending the perpetrators to jail, regardless of their status or rank in the society.

The investigation has enabled the PNP to discover fake news including fabricated kidnappings and rehashed rape and murder cases which have gone viral on social media as they were made to appear to have happened just very recently.

Azurin mentioned their no let-up probe on the case of the 34 missing ‘sabungeros’ which has reached the attention of President Ferdinand ‘Bongbong’ R. Marcos Jr.

The official said he has ordered PNP Criminal Investigation and Detection Group director, Brigadier Gen. Ronald O. Lee to dig deeper into the case and see to it that appropriate criminal charges are filed against anybody identified to have had a hand in the abduction and disappearance of the victims based on evidence and witnesses’ testimonies.

“I am reassuring the public and the families of the 34 missing cockfighting afficionados that our investigation is ongoing and it will continue until such time that the eight separate cases are resolved and the victims are found,” Lee said.

Shortly after he took over as the new PNP-CIDG director two weeks ago, the official announced that one of his priorities would be the continuing investigation of the missing persons.

Last August 17, Lee called for a case conference on the matter and asked concerned officials to give him updates and developments on their investigation.

Lee said they are also looking into claims by some of the missing ‘sabungeros’ relatives that they have been offered a huge amount of money in exchange for an affidavit that they won’t anymore be interested in searching for the victims.

One grieving parent said P1 million has been offered to their family by an unidentified emissary in exchange for the signing of an affidavit disclosing their lack of interest in pursuing the case of their missing relative.

“We are validating the calls and the numbers used by the callers. However, these numbers could not be reached or contacted anymore,” said Lee. The callers used pre-paid SIM cards in sending the text messages to make it hard for authorities to trace them.

The PNP-CIDG chief said they are getting full support from the relatives of the missing persons.

Lee said that to date, they are still awaiting the resolution of the two criminal cases they have filed before the Department of Justice against eight identified suspects and several John Does involved in the Manila Arena abduction case as well as the cases filed against five policemen and other John Does identified as the men who abducted Ricardo Lasco.

He also encouraged more witnesses and those who know about the incident to voluntarily come forward and reveal what they know to help them finally resolve the cases which had prompted former President Rodrigo Duterte to order the nationwide stoppage of all E-Sabong operations.

Azurin also ordered the Police Regional Office 4-A to speed-up its investigation into the case of a 25-year-old man who was abducted and later executed in Taal, Batangas, his body dumped by the killers in Sariaya, Quezon.

The top cop said he wants the PRO4-A headed by Brig. Gen. Jose Melencio C. Nartates Jr. to fully supervise the conduct of the ongoing investigation into the case of the victim who was found dead with multiple gunshot and stab wounds shortly after he was snatched by still unidentified men.

A Special Investigation Task Group was created to probe the case with investigators continuing to search for witnesses and other reliable pieces of evidence that will help identify and arrest the killers.

“We are now tracing the CCTV footages that will help us link the events especially during the time when the victim was kidnapped,” Azurin said.

The top cop said that they treat every case with prudence and critical thinking as he has ordered his men to ensure they won’t sleep on cases especially it if involves gruesome crimes such as murder.

Catibog was driving his motorcycle when a group of armed men blocked his path and seize him. The incident was reportedly witnessed by the victim’s girlfriend.

“We vow to deepen the investigation regarding this case. Thus, the function of the SITG is to look at every angle and fast track the gathering of information related to this case, he said.

The top cop said the Rizal Police Provincial Office has also formed a special task force to conduct a deeper investigation into the death of two men and two women whose bodies were found inside a car abandoned in Barangay Macabud in Rodriguez municipality two Mondays ago.

He added that the Rodriguez Municipal Police Station received a call informing them the discovery of the bodies of four unidentified persons inside a Nissan sedan with plate no. NGU 1923.

For Gen. Azurin, killing is not the best solution in stopping crime