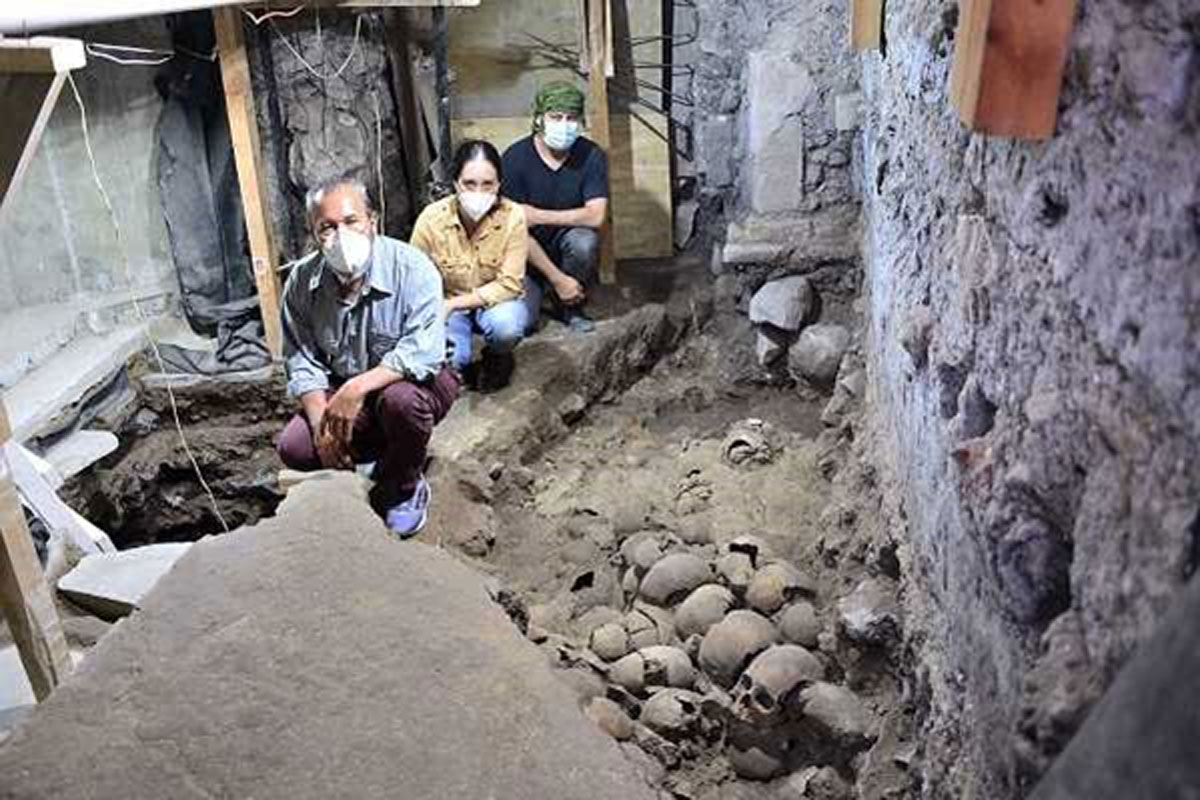 According to Mexico’s National Institute of Anthropology and History, archaeologists in Mexico City have uncovered 119 human skulls organized in a “trophy” tower that the Aztecs built around 500 years ago. Some part of the tower was discovered in 2015, and since then, a total of 603 skulls have been recovered embedded in the construction, showing the tower’s immense size. The skulls buried there are the remains of sacrificed men, women, and children.

The discovery was uncovered at the Templo Mayor, the main temple of the Mexica people in Tenochtitlán, present-day Mexico City, and was made late last year and reported in March 2022 by Mexico’s National Institute of Anthropology (INAH). The 90-foot-tall building, built in the 1300s, served as the location of important Aztec rituals and festivities. The objects were found in the Cuauhxicalco section of the temple, suggesting that they were placed there around A.D. 1500 — a period of time marked by the transition between the reigns of Aztec rulers Ahuízotl and Moctezuma Xocoyotzin. (Source)

One example, among the earliest placed in the offering, was even discovered totally intact; this, according to specialists, was the result of being forced below a level of fiber by the weight above it.

The organisms are members of the “Nidorellia armata” species, also known as chocolate-chip starfish due to their sandy coloration and prominent black dots.

INAH explains that Mesoamericans considered the ceremonial sacrifice that generated the tower as a means of keeping the gods alive and averting the destruction of the universe. Although the tower may appear macabre to modern eyes, INAH notes that Mesoamericans held this belief. “This vision, incomprehensible to our belief system, makes the Huey Tzompantli a building of life rather than death,” said in INAH statement.

A significant number of the skulls, the ages of which spanned from 1486 to 1502, were organized in the form of a circular structure with multiple levels. Rows of skulls that were mortared together and placed with their faces toward the center of the circle make up a portion of the circle. 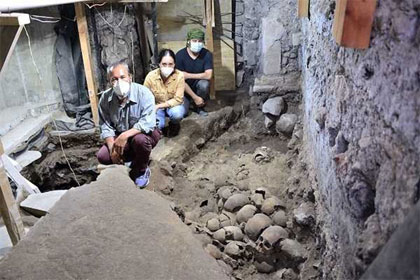 Archaeologists excavating Huey Tzompantli, a “tower of skulls” erected by the Aztec in Tenochtitlán. Photo courtesy of Mexico’s National Institute of Anthropology and History (INAH) 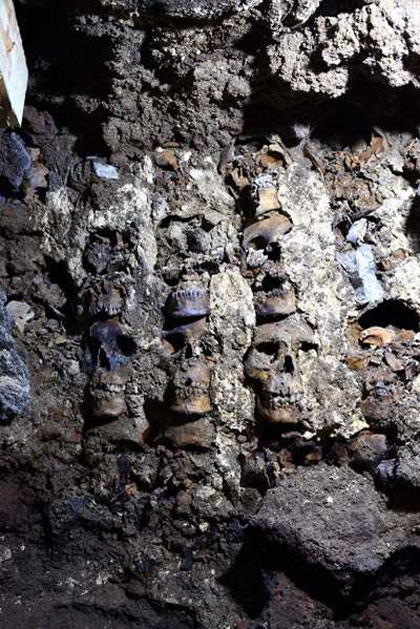 The Huey Tzompantli, a “tower of skulls” erected by the Aztec in Tenochtitlán. Photo courtesy of Mexico’s National Institute of Anthropology and History.

At the height of their dominance in the 15th and early 16th centuries, the Aztecs governed an empire that encompassed both the central and southern regions of modern-day Mexico from their capital city of Tenochtitlan. Archaeologists believe that back then, a massive structure constructed entirely out of human skulls would have been seen as a symbol of power and prestige.

According to the BBC, the skull rack came from a temple that was dedicated to Huitzilopochtli, the Aztec god of sun, war, and human sacrifice. Tenochtitlan was considered to be Huitzilopochtli’s patron city. The Aztecs made trophy racks out of decapitated heads by mounting them on poles and decorating them with skulls. These racks were called tzompantli. When the heads were placed on the racks, they were most likely still in a “fresh” state. After the bodies had decomposed, it is probable that the Aztecs used cement to bind them together, leaving only the skull behind.

The newly discovered skulls were around 11 feet (3.5 meters) below the street level when they were discovered. The spot where they were located is known as Huey Tzompantli. During the dig, archaeologists had to exercise extreme caution because they were working in an area that was beneath a number of historically significant buildings. The researchers were taken aback when they discovered the skulls of women and children among the remains they had been anticipating seeing solely those of young men or warriors.

Archaeologists believe the tower was constructed in three stages, with the last stage occurring sometime between 1486 and 1502. This would have been under the reign of the Tlatoani Ahuzotl administration. The Aztec empire expanded its territory under the leadership of Ahuzotl, the eighth monarch of the Aztecs. Under his reign, parts of modern-day Guatemala and places along the Gulf of Mexico were taken over by the Aztecs.

During his rule, the Aztecs’ realm expanded to its greatest extent, and Tenochtitlan expanded greatly as well. Ahuzotl erected Malinalco’s magnificent temple, added a new aqueduct to feed the city, and established a strong bureaucracy. Accounts claim that as many as 20,000 prisoners of war were sacrificed during the dedication of the new temple in 1487, though this figure is debatable.

Hernán Cortés, Bernal Daz del Castillo, and Andrés de Tapia wrote about the skull racks of the Aztecs in their accounts of how they took over the area. J. Francisco De Anda Corral wrote in 2017 for El Economista. De Tapia said the Aztecs put tens of thousands of skulls “on a very large theater made of lime and stone, and on the steps of it were many heads of the dead stuck in the lime with the teeth facing outward.”

According to the claim, during their occupation of Tenochtitlán in the 1500s, Spanish invaders and their native allies destroyed portions of the towers and dispersed their remnants throughout the region. The Metropolitan Cathedral, which was erected nearby the Templo Mayor ruins between the 16th and 19th centuries, is close to the cylindrical rack of skulls.

The dig’s lead archaeologist, Miguel Báez Pérez, explained that the Aztecs often brought sea creatures from hundreds of miles away as a gesture to the gods. “A good part of the Mesoamerican peoples believed that the origin of the world was linked to the sea; therefore, marine organisms were treated as relics,” Báez Pérez said in a statement. “In the case of the Mexicas, their military power allowed them to bring thousands of marine objects and recreate an entire aquatic environment in Tenochtitlán itself.”

Terrifying Monsters And Urban Myths From The Philippines