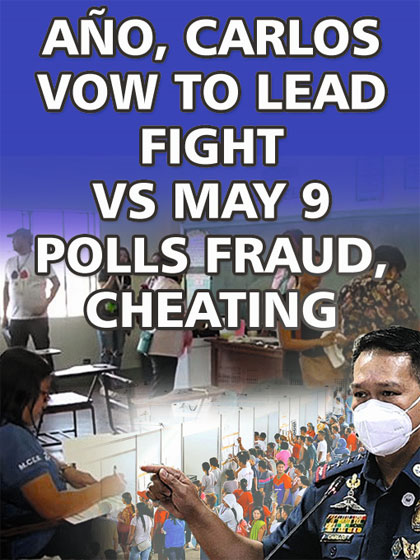 ANYBODY who will try to undermine the May 9 national and local elections and subvert the will of the people by engaging in cheating and other fraudulent activities will find themselves being subjected to massive police operations, Department of Interior and Local Government (DILG) Secretary Eduardo M. Año and Philippine National Police (PNP) chief, General Dionardo B. Carlos have assured the country.

Año also maintained that President Duterte has repeatedly told them he won’t endorse any presidential candidate who will lead the country in the next six years and that just wants to have eaceful, clean, orderly and honest elections.

A member of Philippine Military Academy (PMA) Class 1983 who used to head the Armed Forces, the DILG chief said that for that matter, his order for the PNP, the Bureau of Jail Management and Penology and the Bureau of Fire Protection is the same.

“We will not be partisan, we will protect the sanctity of the votes and we are ready to prosecute anyone who will play politics,” he said.

The DILG chief also reaffirmed their commitment to guard the will of the people and protect the right to suffrage while adding they are keeping their guards up to ensure the safety of the public, the candidates and their supporters.

Año also warned politicians anew from employing unauthorized bodyguards or private armed groups as he ordered the PNP to focus efforts on guarding at least 105 municipalities and 15 cities which have been identified as election areas of concern due to the presence of PAGs and other lawless elements as well as history of bloody poll-related incidents in the last two previous elections.

The two officials said they are fully coordinating with the Commission on Elections (Comelec) to ensure peaceful and honest elections amid the pandemic.

The poll body has already formed a task force versus vote-buying composed of officers from the Comelec, PNP, AFP and the National Bureau of Investigation (NBI).

PNP Deputy Chief for Operations and the chair of the National Task Force-National and Local Elections 2022, Lieutenant Gen. Ferdinand O. Divina said there would be more focused deployment of police personnel in identified ‘hot spots.’

Carlos said that they have created Regional Special Operations Task Groups (RSOTGs) that will keep guard in areas with intense political rivalries.

He added that the RSOTGs in Samar and Masbate are doing good in maintaining peace in the two areas which are both known for having registered violent poll-related incidents specifically during the past two elections.

So far, there is a generally peaceful situation in the national and local campaign fronts. However, the PNP is not taking any chances and is seeing to it that their security measures will hold until the end of the May 9 national and local elections on June 8.

The PNP is getting real-time situation updates from the 17 Police Regional Offices being sent regularly to the PNP Command Center in Camp Crame.

Records show that there are 18,023 elective posts being contested with 845 candidates including 39 congressional bets out of the 253 seats in the House of Representatives running unopposed.

Prior to the start of the May 2019 election campaign period, the PNP identified 701 areas including the cities of Mandaluyong, Manila, Caloocan, Malabon and Pasay as election ‘hot spots.’

The PNP leadership said then that the number were almost half or 42.9 percent of the 1,364 cities and municipalities in the country and prompted them to ‘adjust’ the deployment of their personnel for election duties.

The PNP has not monitored any ‘credible threats’ to the May 9 polls so far.

Carlos said they will continue to enforce the mandatory wearing of face masks by the public as ordered by the Inter-Agency Task Force for the Management of Emerging Infectious Diseases during the campaign period to help prevent the further spread of COVID-19 virus.

He said the intensified law enforcement operations will be done thru service of warrants of arrest and search warrants, checkpoint operations, police patrols and response as well as the so-called ‘Oplan Sita/Bakal/Galugad.’

Based on historical data of previous elections, election related incidents resulting from intense political rivalry are known to escalate during the start of the campaign period.

“We will ensure to remain apolitical and to protect the will of the electorate by ensuring honest, orderly and peaceful elections in May,” Carlos said.