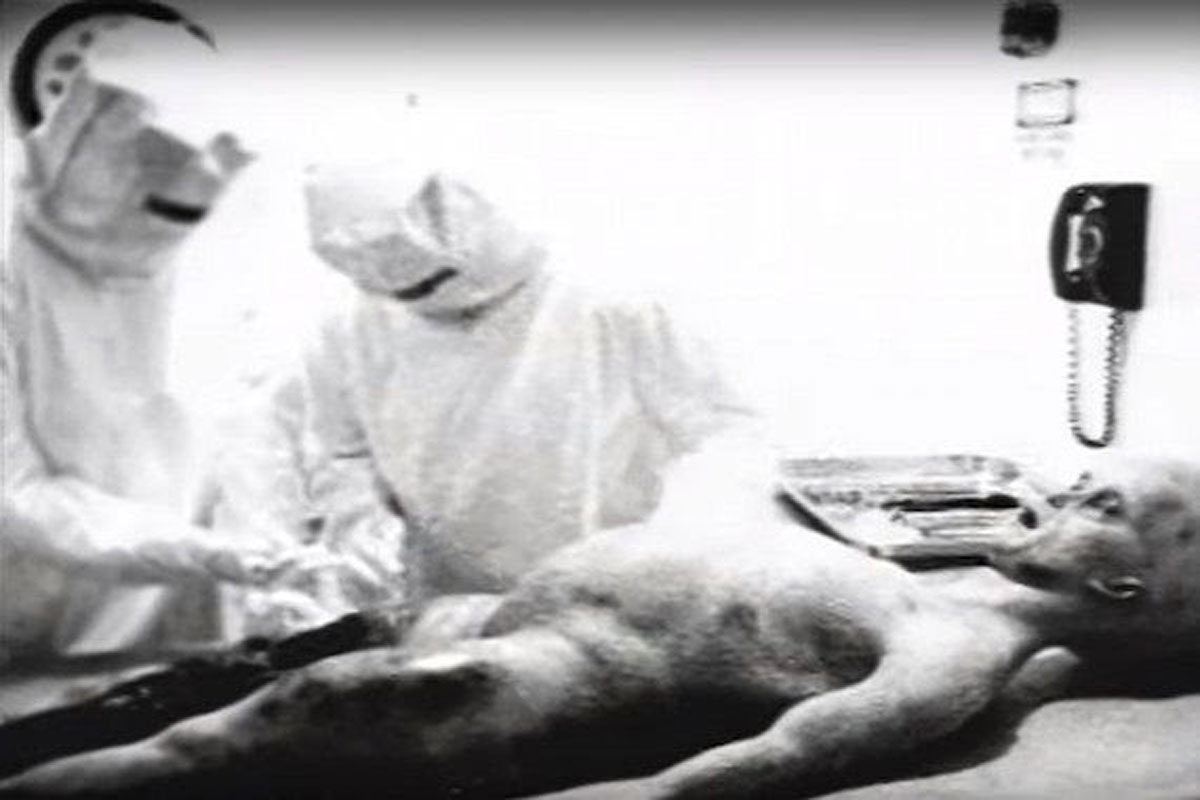 My previous article was titled “Retrieved UFOs and Dead Aliens: Have Their Ever Been Any? Nope.” I was focused on why I don’t think there have ever been any real, crashed UFOs. In that same article I made a brief reference to deceased ETs. Like the cases that I think were actually “crashed UFOs that never were,” the same can be said for tales of dead aliens and extraterrestrial autopsies. Of course, the most well known alien autopsy saga was that of Ray Santilli that surfaced in 1995. Such was the interest in Santilli’s story (and film-footage, too), it still interests some people in Ufology to this very day. It was in the heady, X-Files-dominated days of 1995 that Ray Santilli let loose upon an unsuspecting world the infamous “Alien Autopsy” film. More than a decade later, and after a seemingly never-ending period of controversy and debate, Santilli finally ‘fessed up to the fact that the controversial footage was nothing more than a, ahem, “restoration.” So Santilli’s highly convoluted story went, he really did have in his possession 1947-vintage U.S. military film that showed the secret autopsy of a bald-headed, pot-bellied alien who had had the unfortunate bad driving skills to crash to earth deep in the harsh deserts of New Mexico. Ironically, however, Santilli elaborated, the real footage had supposedly degraded to the point where it was both unwatchable and unusable from a broadcasting perspective; and so he enlisted the expert help of special-effects chums to work on that aforementioned restoration. Hmm. There are, however, other – lesser known – tales of alien autopsies. 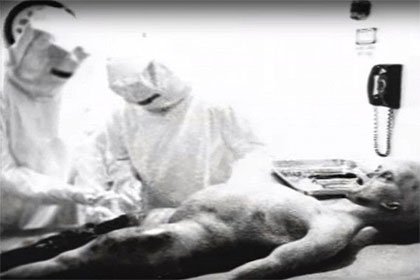 A still from the “Alien Autopsy” video

For decades, the now-late Ufologist Leonard Stringfield collected reports of crashed UFOs. One such case involving an alien autopsy (or, rather, an alleged alien autopsy) reached the eyes and ears of Stringfield in 1980. The story came from a typical “unknown source.” Ho-hum. In Stringfield’s case, the source was a Mr. “T.E.” The story told to Stringfield went as follows: it was 1953 when T.E., only twenty at the time, held a military position in the New Jersey-based Fort Monmouth. On one day at the base, T.E. and his buddies were ordered to go a specific room. They did so, then sat down,. A piece of black-and-white footage began to play. According to Stringfield, “Without any briefing, the 16mm movie projector was flicked on and the film began to roll on the screen…the film showed a desert scene dominated by a silver disc-shaped object embedded in the sand.” And, then, suddenly, “…there was a change of scenes. Now in view were two tables, probably taken inside a tent, on which, to his surprise, were dead bodies. T.E. said the bodies appeared little by human standards and most notable were the heads, all looking alike, and all being large compared to their body sizes…They looked Mongoloid.” 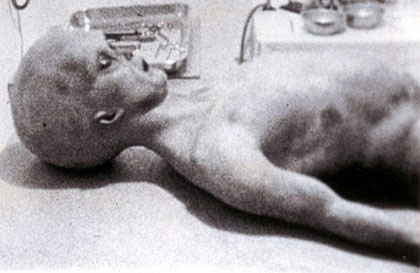 What I find particularly interesting about this story is that T.E. and his friends were advised to “think about the movie.” Not long later, the guys were told the footage “was a hoax.” It was added that: “The 5-minute long movie certainly was not a Walt Disney production. It was probably shot by an inexperienced cameraman because it was full of scratches, and had poor coloring and texture.” Then, there is the little-known story of Pennsylvania-based UFO researcher Joan Jeffers who – having read the “T.E. Report” – stated in a letter to Stringfield on February 6, 1979 that she, too, had spoken with a military source who claimed to have seen what sounded suspiciously like the same film – but, at a “radar facility” in Maine, USA around 1956. I have to say that T.E.’s story of the footage being a hoax – and that the guys should think about it – makes me think of the National Security Agency “plant” story relative to an alleged crashed UFO off Spitsbergen, Norway in 1952 that was mentioned in my previous article. Someone in the intelligence community, I suspected, wanted these stories to get out into the world for reasons that, so far, are unclear.

Two years after the T.E. story reached Stringfield, there was another development, as Stringfield said: “On a tip from Bill Hamilton of Phoenix, Arizona, at the MUFON Symposium in Houston, June, 1980, I was soon in communication with Ms. C.M. of Los Angeles, a successful freelance writer who knew about a secret movie allegedly showing a freshly recovered alien craft with occupants, filmed inside an Air Force hangar. The movie, in color with sound, and of 17 minutes duration, said CM, was in the possession of a person formerly in government service, whom she did not identify…one scene showed the removal of five alien dead bodies.” We now have to turn our attentions to the terrible Challenger Space Shuttle disaster that occurred in January 1986. Aboard the shuttle was astronaut Ellison Onizuka. He said that back in 1973, he’d seen film footage – at McClelland Air Force Base – that showed “alien bodies on a slab.” 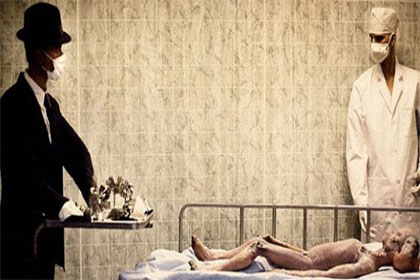 Also in 1986, U.K.-based ufologist Jenny Randles was told of an alien autopsy. In the latter part of the year, Randles was approached by a man she referred to as “Robert.” He was on his way out of the military, so the story went, so he wanted to share with Randles what he knew. Supposedly, Robert had seen photos, rather than footage. And there was more than just one dead alien. There were several of them. When I interviewed Randles about all this in the 1990s, she said the following to me: “…there was a very detailed account that was mostly filled with medical jargon about the autopsy which he didn’t understand, and there was a photograph of this entity with a slit right down the middle from the neck to the navel.” Randles had more to say to me:

“One of the things Robert said was that the aliens were very human-looking. He said that the head was completely bald, but the most unusual feature of the face was the nose, which was almost flush into the face – almost unnoticeable. He couldn’t tell from the photographs, but the autopsy report made it clear that the beings were slightly smaller than average human size – about five feet in height. Bearing in mind, 1986 was years before the autopsy film [from Ray Santilli] surfaced. In fact, the connections with the autopsy film and with what Robert told me are chillingly similar. One of the impressions that you get from the alien autopsy footage is that the body is very human-like; and is around five foot in height. I have to say it struck me as soon as I saw the footage that this was very similar to what Robert had described.” 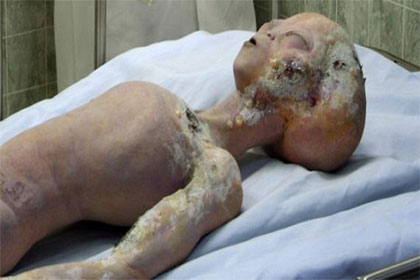 What I find intriguing about this whole saga is the fact that these incidents all seemed to have been staged. For example, “T.E.” was told to think about the footage he’d seen, but was later informed it was a hoax. Onizuka said he’d seen footage of dead aliens back in the early 1970s. No reason was made as to why Onizuka was allowed to see the film. And, as far as the 1986 affair of Jenny Randles goes, that, too, smacked of a staged event. Someone, I suspect, wanted Randles to spread the story here and there. To her credit, Randles chose to stay quiet for a number of years. I say we’re not looking not at any real autopsies. I say: models, films and dummies created by U.S. intelligence to freak out the Russians during the Cold War. Such a thing would not surprise me at all.

Woman says she was ‘attacked by angry ghost’