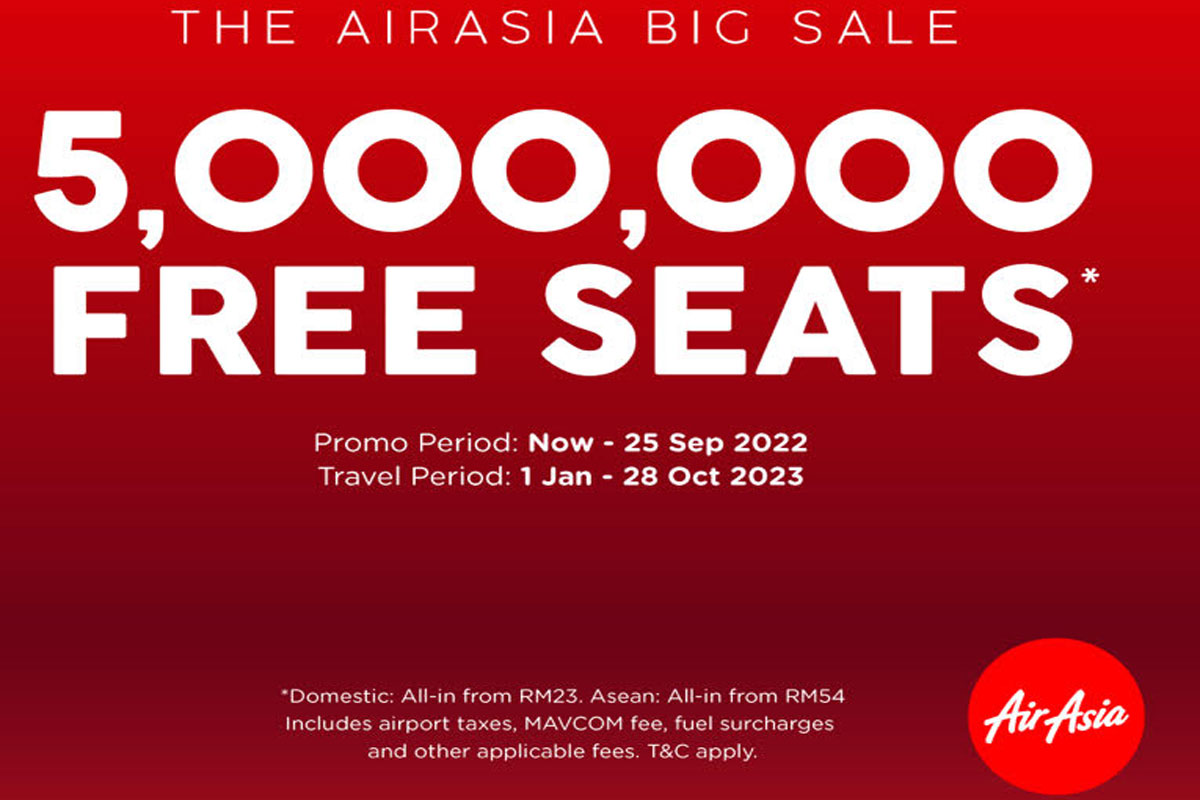 Kuala Lumpur — AirAsia is celebrating its rapid comeback as all airlines are flying sky high once again. Five million FREE* seats are on sale to mark the milestone proving as always, AirAsia is Asia’s low fare leader, enabling everyone to fly.

For a limited time until September 25, value seekers can snap up unbeatable flight deals across Asean and beyond for travel between January 1, 2023 and October 28, 2023 by clicking on the ‘Flights’ icon on the airasia Super App or website.

The FREE* seats are available now on many popular domestic and international destinations across Asean including Langkawi, Penang, Johor Bahru, Krabi, Phu Quoc and Singapore.

For those who’d like to spread their wings further, fares are also on sale on the longer haul AirAsia sister airlines AirAsia X and Thai AirAsia X where flights to South Korea, (Seoul), Australia (Melbourne, Sydney, Perth, Auckland), and India (New Delhi) are also on sale from just RM499 (PHP6,286.97) for economy seats and from RM1,499 (PHP18,886.12) for premium flatbed seats for travel between 3 October 2022 and 28 October 2023 (all inclusive of taxes and charges).

Karen Chan, Group Chief Commercial Officer of AirAsia, said,“It is great to be back, better, stronger and more united than ever before, a unity we hope to share with the masses who’ve greatly supported us all these years. While COVID changed the world forever, some things never change. As the people’s airline that prides itself on connecting people to places, AirAsia continues to put our guests at the core of everything we do, and this is what drives us to create more value deals and opportunities for everyone to fly.

“In the last 21 years, AirAsia has carried more than 700 million passengers, and nearly 100 million guests annually pre-pandemic, revolutionising the industry and giving everyone access to affordable air travel. We were here for you then when we started, and we are here for you now. With the progressive re-opening of borders and in preparation of our 21st anniversary, we wish to thank our loyal passengers who have stood by us and flew with us with the biggest ever FREE Seats* campaign. Not only have we resumed many of our much-loved routes, we’re also introducing new and exciting ones for greater value and choice.

“Watch this space and spot us around Kuala Lumpur as we continue to paint the skies and the ground red, for more exciting announcements in the upcoming months as part of our 21st anniversary celebrations.”

The FREE* seats promotion is available exclusively on the airasia Super App and website, until 25 September 2022.

Stay up to date on the latest in flights, travel, lifestyle and more following @flyairasia on Instagram/Facebook or @airasia on WeChat/Weibo for the latest updates. For a seamless and enhanced experience, download your airasia Super App from the Apple App Store, Google Play Store, or Huawei AppGallery.

MOA inked on transfer of CAAP functions to BARMM-MOTC inked